Is Bitcoin capable of stepping into the US dollar shoes one day? 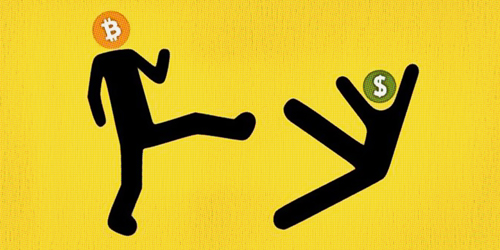 Despite BTC being claimed the world’s most unstable asset in terms of investments in 2014, many still think it has all opportunities to outdo traditional currencies.

Experts say, the current usage rates of Bitcoin, coupled with the block-chain technology behind it, are among its very strong advantages, but, on the other hand, some also find these features undermining the cryptocurrency’s real potential. So, does BTC have it all to supersede the USD and other hard currencies that have dominated the market of payments for many years now?

The thing is, the stability of these real currencies is backed by various assets and control bodies, whereas Bitcoin’s current value is based on its relatively moderate expansion and natural restrictions of the total number of coins mined and circulating. The cryptocurrency is not influenced by the price of precious metals, but rather depends on such market basics as demand and supply. Just unlike the case with fiat currencies, the emission of new bitcoins is not regulated by financial structures like banks, but then BTC can’t serve as a tool to neither enhance economical advances nor keep inflation rate under control. Bitcoin’s decentralizedness is also a two-edged sword: at one point, it enables BTC users to be fully in control of their funds, especially that data encryption technologies are constantly improved, but at another point, this very decentralized nature of the cryptocurrency makes it vulnerable in terms of virtual safety and security. It is apparent Bitcoin needs to be more hack-proof to start posing a real threat to fiat currencies.

Switching to BTC payments has really big chances to turn the existing market into an open-sourced one, and Bitcoin’s real value is very likely to be boosted by the growth of its usage and recognition. As of today, dozens of merchandizing companies worldwide have already made their first steps in Bitcoin integration, offering numerous advantages of instant low-cost cryptocurrency payments to their customers.