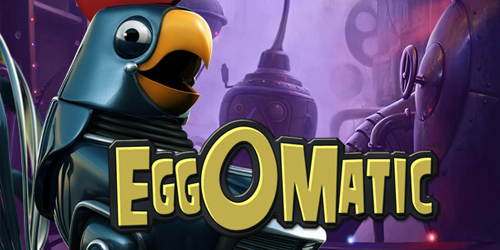 This may easily be one of NetEnt’s most fanciful yet highly entertaining creations that you’ll simply fall in love with from the very first second.

As you start playing the “EggOmatic” slot, you actually realize the events in this game actually take place at an eponymous factory, where various perching multicolored bird-like robot workers represent the reel symbols. While the latter stand for lower paying values, there is also a series of higher paying ones, including a big red hen, a pink hen, and a couple of metallic chickens in other colors.

The game doesn’t offer its players a bonus game as such, but there are two outstanding special features being a worthy replacement for it. The one is being launched by a scatter symbol looking like a golden egg. What it does is multiplying both the bets level and the number of the winning, and, as a result, you may enjoy a significantly boosted amount of your bonus points in “EggOmatic”!

Then, there is another magnificent option in this game, and it can be revealed with the help of another scatter symbol, this time in the form of a green egg. Whenever you see it on the conveyor belt hanging above the reels during the gameplay, get prepared for a free spins reward, with the amount of extra spins you can eventually get ranging from 7 to 50! And yes, free spins can also be re-triggered during the free spins round.

There are two kinds of wilds in “EggOmatic”. The first looks like a silver metallic chicken, and it traditionally replaces all other reel symbols to help you make up winning combos, while the second one called the Spreading Wild and being represented by a special “W”-labeled egg, turns absolutely all symbols next to it into wilds, either in regular game play mode, or in the free spins sequence!

On top of it all, there is also an exclusive in-game feature called the Surprise Egg. As you may have guessed already, its icon looks like an egg, but it’s completely different from other eggs in this game, as it’s a multi-colored one, with a question mark on it. Essentially, the Surprise Egg acts as a random symbol that can trigger a golden egg scatter, a green free spins egg, or the Spreading Wild egg for you, with the game’s AI determining the consecutive surprises by the one you have unlocked first in the session.