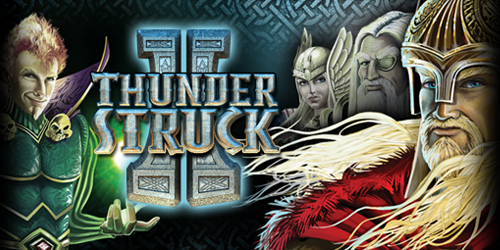 The power of Norse gods is simply unmeasured! Play this atmospheric slot game and see how generous and benevolent they can be!

This genuinely distinctive virtual slot designed by Microgaming does not lose its popularity among gamblers all around the world despite the fact it was launched in 2010. The Norse god themed game features 243 paylines on its five reels, and is a real discovery for the fans of ancient legends!

The slot’s logo serves as the Wild symbol in “Thunderstruck II”, and, traditionally, it is meant to replace any other reel symbol to help you construct winning combinations. The wilds in this game are, however, not to be confused with the randomly activated Wildstorm features, which, if triggered, instantly rewards you with a free spin and turns up to 5 reel into wilds, meaning you can expect really huge winnings in these rounds!

Another remarkable feature definitely worth mentioning is The Great Hall of Spins truly adored by the game’s fans. It can be launched by landing no fewer than three Bonus Hammer symbols on the reels, and what it is essentially is the most paying feature of this slot. The Great Hall of Spins combine the free spins mode and a 4-step quest to the game’s bonus: from the Valkyrie level where you can be rewarded with 10 free spins and an x5 multiplier for all your winnings, plus a re-trigger, through the Loki (getting you 15 free spins and the Wild Magic feature) and the Odin (a bonus of 20 free spins and the very special Wild Raven feature randomly creating up to x6 multipliers from other symbols) levels, to the final Thor feature offering 25 free spins and the Rolling Reels sequence which multiplies the symbols during every freespin to up to x5!

And that’s not all, as, having all these steps completed, you can select any of these levels again to refresh your excitement from “Thunderstruck II”, thanks to the game’s memory functionality! That’s probably something you won’t find in many other slot machines!