How a bitcoin transaction works 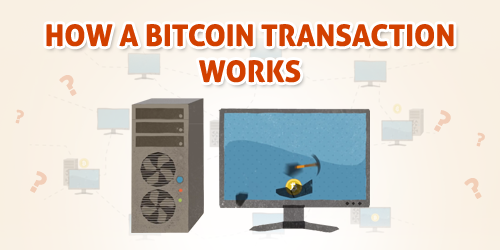 BitcoinCasino.info gives answers to the most common questions regarding the way Bitcoin transactions work. Read our guide to better understand the process.

How Bitcoin transactions work – a simple step-by-step explanation
As you may have learned already from our previous educatory articles and how-tos, during a bitcoin transaction (a regular payment or casino deposit you’re making) the designated amount of BTC cryptocurrency are digitally sent from a sender’s wallet or storage to the receiver. What you should know else it that every single transaction is electronically encrypted for security enhancement reasons, and that all transaction are public, i.e. all members of the Bitcoin network can track them down in the overall ledger known as the block-chain. Now, it may come as a surprise for you, but in reality bitcoins do not exist in any form and are not actually ‘stored’ in wallets. You can’t see or touch them. Instead, a wallet contains data about the ‘imaginary’ amount of BTC in it (just as in case with real money bank accounts and transactions), and, likewise, the block-chain has only records of transactions conducted or ongoing, as well as the information about the current Bitcoin balance of all users (only shown personally to each of them).

So, what happens exactly in the beginning of a generic BTC transaction is a three-step information transmission sequence. If X is to send a certain amounts of bitcoins to Y, then, first of all, a data input takes place and is recorded first in the ledger. It also includes the data about the initial sender (let us call this sender Z) that X received the bitcoins (now intended to be sent to receiver Y) from. The second step in the transaction sequence is the designation of the amount of BTC that X is going to send to Y. The final step is Y’s personal BTC address. Once again, all this data is recorded in the block-chain to be stored there for as long as it is needed (ideally, forever).

How a bitcoin transaction works: what happens next
The next logical step would be initiating the Bitcoin sending procedure. To be able to send BTC to a receiver, two important pieces of information are required: a receiver’s unique Bitcoin address, and a special private key. Both are alphanumeric, and generated randomly, but if the former is publicly available, the latter is only known to the parties participating in the transactions, and is actually a kind of a digital key required to start the procedure and receive the object of the transaction. In a generic procedure, the key is used by the sender (X) to sign the input reference (the one containing the data about the origin of bitcoin being sent), the designated amount meant for sending, and the receiver’s wallet (Y) address. Then, the data about the transactions is published in the block-chain to denote the transfer sequence. After that, the transaction is verified by other members of the network, scheduled in the overall transaction block (i.e. placed on a kind of a waiting list). Sometime, this stage may take a little longer time than expected, as you need to wait for your network peers to finish mining another block (it takes them about 600 seconds). In some cases, you also have to wait for some service providers/sellers/operators to confirm the block manually, meaning it will take some more time for the payment to be completed and received. Some of them, however, don’t do that, as they trust you (of because the Bitcoin amount you’re getting or sending is too small to bother about it). Finally, as soon as the block’s equation get solved, the bitcoins reach Y’s wallet.

How bitcoin transaction works: thing getting a little more complicated, but the ending is happy

It is absolutely natural that several transactions from various sources have connection to a certain BTC address. Imagine several of X’s friends having sent him bitcoins as birthday gifts, but everyone sends a different amount. In fact, in X’s wallet these will not be a merged into a single record being a total sum of all the gift amounts. Instead, each of them will be presented as separate transaction, although the balance will be shown to X as a grand total.

Whenever X would like to send any part of these bitcoins to some other friend (let’s say Y), X’s wallet will automatically attempt to make up this transaction of previously made transactions amounting to the Bitcoin sum X wants to send to Y. If X has 10 BTC in his wallet, which he received them as 2 + 5 + 3 bitcoins from three of his friends as gifts, and now he wants to send 4 bitcoin from his wallet to Y, it may seem impossible as none of his friends sent X an amount of 4 bitcoins previously, i.e. there is no record of such transaction in his wallet.

And there is even more than this. None of the bitcoin transactions that X received previously cannot be divided into smaller parts, as it is just stored the way it was ‘credited’ to the balance. However, there is a great solution to X’s problem, otherwise the whole Bitcoin system would be just useless. Actually, willing to send only 4 BTC to his friend Y, sender X will automatically send more (we have a record of a 5 BTC transactions in his wallet, don’t we?), and then simply be returned the change, which is the remaining 1 bitcoin (5 minus 4). By the way, the described method enables Bitcoin transactions to be divisible, meaning users can send as little of 1/100 000 000 of a bitcoin if they need to. Such fraction of Bitcoin is called a satoshi, and that’s a word you probably heard a lot.

Now it’s probably getting clearer. Bitcoin system is not that complicated if you don’t go into details too much. So, if ‘How does a bitcoin transaction work?’ was among the questions you’ve been looking a rather simple answer to, we sincerely hope the text above has been really helpful.