This June, BitCasino.io is getting a set of new Quickfire games! 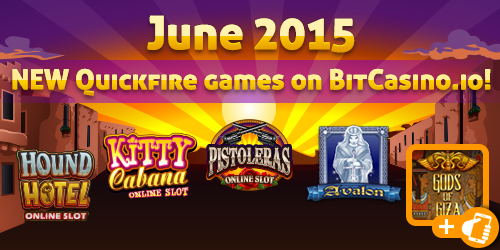 Starting from today, June 3rd, BitCasino.io welcomes you to try and play another fine selection of the astounding new slot games by Quickfire and Genesis Gaming!

All in all, BitCasino players are getting access to five more great Quickfire (powered by Microgaming) online slots, with all of them offered to be played in desktop versions, and one game also coming as smartphone-compatible! That’s a really nice addition to BitCasino’s current record-breaking choice of almost 600 virtual casino games of all kinds, and there are definitely more new must-plays coming this summer!

Here’s the list of the new games available to you now:

Kitty Cabana
In this wonderful 5-reel 25-line slot game, the scene is laid in a luxurious spa set in the world inhabited by charismatic cats. Try your luck with the three-level Kitty Cabana Bonus enabling you to make up your own custom free-spin feature, and win your tasty part of the delicious total prize 110 credits! The special in-game Frozen wilds and Dashing wilds winning symbols, as well as various achievements and free-games, are available, giving you extra chances to boost the final win!

Hound Hotel
From a spa for cats we’re moving to a hotel meant specially for dogs, so if you’re rather a dog person, that’s definitely a slot game you’ll fall in love with. Packed with pretty much similar features as the ones in Kitty Cabana game mentioned above, the 5-reel 25-payline Hound Hotel can also boast Super Stacked Wilds feature meant to multiple your winnings! Free games and in-game achievements come as a pleasant supplement. That’s a genuine dog’s delight!

Pistoleras
Wild West is the place where really wild things happen, that’s for sure! And yes, be prepared for some wild action and hot gunslinger señoritas in the superb virtual slot machine called Pistoleras! With 25 paylines on five reels, free spin features, a special Saloon Bonus, Wild symbols, and a pack of other in-game functionalities, your journey to the American wilderness will be truly adventurous and rewarding!

Avalon HD
The all-time classic slot game has been significantly improved to meet the ever-increasing requirements of the most demanding gamers. In its new sleek widescreen form, it can offer you a truly seamless experience on your way to the mysterious misty lands of the legendary island of Avalon. Extra features like free games and Gamble functionality are also included to enable you to get the most of your bankroll!

Gods of Giza
Can you hear the mighty gods of Ancient Egypt summoning you to come and share their golden treasures? Essentially, you don’t have to travel back in time to do that, just start playing the Gods of Giza video slot game and see how generous the deities can be! This 4-reel 20-payline slot machine has everything it takes to grab your attention for hours and days, including the wonderful in-game bonuses and functionalities like wilds and scatters, as well as free spin features with rotating reels. And yes, as we have mentioned above, this game is also available on your smartphone, meaning you can win really BIG wherever you stay at!

All of these games are offered in over 20 menu languages, including the most spoken ones in the world, plus more exotic ones, so it is more than just likely you can access these genuinely top-rank games on BitCasino.io in your preferred language!