Physical Bitcoin tokens – why would you buy one? 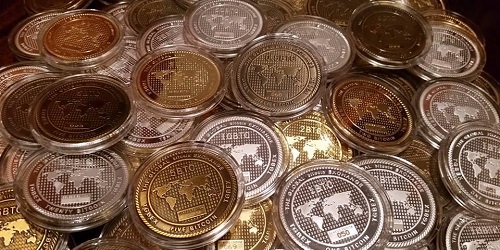 There is a persistent demand for liquid physical Bitcoin tokens, preferably from a trusted and reliable manufacturer, among BTC community members around the world.

But how is that possible? In the digital age, we all are accustomed to money represented by just digits on screen. Well, yes, you can turn abstract money into crispy banknotes and shiny metal coins called cash if you wish to, but their era seems to be gradually coming to an end.

People got used to paying with credit cards, but it’s still hard for them to comprehend the concept of a currency that can only exist in the ephemeral space without material form. And that is exactly what cryptocurrencies are, with BTC being the most widespread of them. Well, no problem. Thanks to TGBEX Limited, you are able to touch bitcoins and even stick them in your pocket.

Actually, Casascius was the first company to produce physical Bitcoin tokens, but a year ago they quit under the extrajudicial pressure of the US. Now, Casascius tokens are very hard to find, as they mostly ended up in private collections.

Isle of Man-based TGBEX decided to fill in the void and produce their own Bitcoin tokens, based on the latest technologies.

On the reverse side of every TGBEX’s token there is a public key which allows its owner to verify the denomination of the coin. The secret key is hidden behind a security hologram preventing stolen or lost tokens from being sold – you can only see the secret key if you remove the hologram. Don’t do it, however – the potential buyer will immediately note the removed hologram.

Currently, TGBEX’s tokens are produced in limited series, and their price exceeds the notional value – a 500 mBTC token costs $312, while the current rate is $366 per 1 BTC. The higher the token’s denomination is, the better its quality is. There will be only four hundred 20 BTC tokens issued – made of pure silver and packaged in a sealed polycarbonate case. The current intrinsic value of such token is ca. $7700, but the coin itself will cost you $9226.

So, what’s the point of buying physical Bitcoin tokens?

Let’s start with the fact that Bitcoin’s intrinsic value is not fixed, and it remains extremely volatile – your token’s price is more than likely to rise significantly in the near future. At one point, you may be unwilling to pay extra, and simply purchase bitcoins at the exchange, but TGBEX is there to offer the potential customers something more than just Bitcoin tokens.

Aesthetics may be a subjective matter, but at the same time tokens are collectible, so why not think of it as their raison d’être. The main question is not what these tokens can do for you personally, but rather what they can do for Bitcoin as a whole.

Tokens are a symbol of permanence: they will continue to exist, no matter how many hands they changed and what they were spent on. They are something that can be shown and touched, but their purpose is to reflect the fundamental differences of Bitcoin and fiat money, not the similarities.

Satoshi tokens will never exist in a completely material form. It’s too expensive to store secret keys in cases made of nickel or precious metals. The future of Bitcoin remains there in the virtual space, gradually ousting fiat money belonging to the material world. Perhaps, one day physical Bitcoin tokens will become something rare and collectible, remembered as an artefact of the old times.