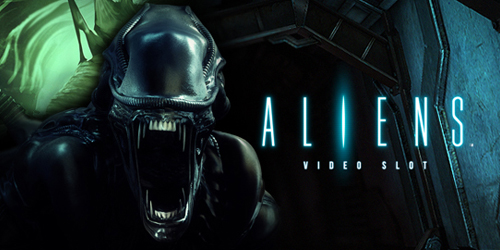 There are some places in the universe you don’t go alone, they say. In this astonishing slot, you can prove you’re host in yourself, and win immense prizes!

NetEnt has made millions of the “Alien” franchise fans extremely happy by launching their truly one-of-a-kind “Aliens” slot machine themed after the eponymous 1986 sci-fi action horror film – the sequel of the original “Alien” blockbuster.

The game we’re talking about here is as cool as the movie it’s based on, thanks in no small part to the groundbreaking glossy ultra-sharp 3D graphics, an atmospheric blood-freezing soundtrack together with other realistic sounds and audio features, as well as a set of beneficial features and bonuses letting you take full advantage of your BTC gaming balance.

All in all, there are 15 ways-to-win on the game’s 5 reels, with the symbols on the latter needing no introductions: you get several depictions of facehuggers, alien eggs, and several Alien species, including the Alien Queen. Also present is the Wild symbol represented by the notorious Weiland- Yutani Corp. logo. At your disposal are special multipliers that you can accumulate, wild substitutions, and the re-spins options.

The are three featured levels in the game, starting with the initial ‘The Search’ stage. As you start playing, your primary objective here is to infiltrate the facilities swarmed with Aliens and find as many multiplier symbols as you possibly can, so as to reach the maximum on the 9-level Alien Activity scale shown on your screen. The sooner you do this, the quicker you can unlock the next level called ‘The Encounter’. The task here is to hold out as you’re being assaulted with hordes of the hideous acid-blooded beasts, and all the multipliers you’ve been able to gather in the previous level, will contribute greatly to your winnings in this one, as you can combine them with certain symbols landing on the reels as you play. In total, you’re able to reward yourself with up a x6 multiplier for three symbols per one spin, resulting in a significant prize.

Pay special attention to the ‘Ammo Clip’ reels with ammo icons shown on it, as every time you can see in the mid-position, the amount of the ammo clips you have is increased, meaning you can launch the re-spins sequence. Blast the terrifying creatures, and after every spin the ammo clip counter will drop.

Now the game starts for real, as you’ve probably made it to ‘The Hive’, the third and final stage of the “Aliens” slot. The entry gets you 5 free-spins extra as reward, and you should know very much turns on this level, as the moment when you can actually eliminate the Queen Hive is approaching, with every new level increase on the Hive Health scale getting you a 200+ times boost of the initial stake you’ve made. As soon as you annihilate the seemingly-imperishable leader of the deadly clan using a grenade (its force of explosion is aggregated with the featured up to x10 multiplier on the corresponding reel’s middle line you’ve been able to activate), you eventually terminate the Hive, too.

Where you can to play slots from NetEnt