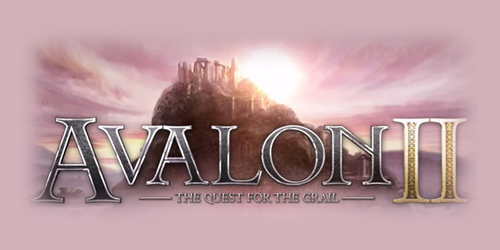 Developed by the team of Microgaming casino soft wizards, this game has become a true revolution in the world of legend-themed slot machines!

With its generous 243 ways to win on the set of five reels, you are more than likely to become victorious in the brilliant ‘Avalon II Quest for The Grail’, especially considering its range of in-game bonus features. Two of them, called the Expanding Wild and the Merlin respectively, may be activated randomly in the base mode game: while the former will enable you to turn the entire middle reel into a wild one, the latter will reward you with an extra multiplier or even a cash bonus!

No winning spin scored? Worry not, as you can still be eligible for an up to x20 multiplier for the current stake. Apart from it, the games offers a lucrative Grail Bonus which you can activate by scoring no fewer than three Grail symbols on the reels. After you’ve done it, you’ll get instant access to a set of additional bonus features like the Lake of Legend getting you a multiplier equal to the number of dots on the dice you will be able to roll in this round, and all successive rolls boosting the initial amount of your last stake 6 times!

Also, with the help of the exclusive Misty Value feature you will be able to select a wild symbol for yourself: there’ll be 15 freespins for you to grab, and you’ll get a chance to choose 1 high-value reel icon to set it as another wild multiplying your current standings by 2! And if you have taken advantage of either of the two main bonus features mentioned above, you are granted access to some two more: the Whispering Woods letting you pick from 5 shields to unveil the highest multiplier available and win up to x160 your stake, or the Forest Falls feature getting you 20 free spins extra.

In the Dusky Moors feature there will be twelve helms letting you match two of them to eventually win one of the multipliers from x6 times to x20, while the Morgan’s Keep feature is essentially a free spin game where you can get a reward of 20 freespins and a x2 multiplier on top of it! Then, in the Hall of Shadows feature, every step you take, including assaulting and blocking your rivals, will result in various cash prizes, and that is exactly when you can actually uncover the Grail itself!