With little known about this slot at the time of this review, we managed to scrapple the little bits and pieces of info from its demo version. So until it’s official release date in August 2018, this is all there is.

Similar to NetEnts starburst slot, the Berryburst graphics is one of scintillating coloration and an upbeat soundtrack. Also having over 7 symbols consisting of spades, hearts, diamond all enclosed in bubbles and fruits comprised of orange slice, lime, berries and the most rewarding sign is the ice cube as the wild, which triggering a re-spin every time it lands on a reel.

– Features of the Berryburst

Functioning as a cluster-pay virtual slot, on a 3×5 reel, a minimum of 5 cluster needs to be formed for a win. Also, this slot pays as much as 50x a players stake, for a cluster of the lowest value symbols, like the orange slice symbols and pay as much as 250x for the wild symbol, which also triggers an auto re-spin. 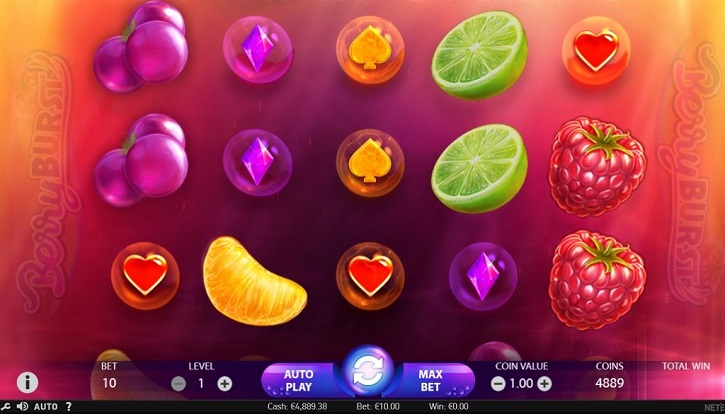 The Berry burst can be played from 10c to 200 eur for a spin. And a winning potential that is over 1250x the player’s stake for just a spin.

When the wild symbol lands anywhere on a reel, it expands all through that reel, locking in for a re-spin, but every pending reward is awarded before a new re-spin. Also, if more wilds symbols appear on a re-spin, it will close in for another re-spin, and if another appears, then another re-spin, until all five reels are filled with wilds, which is on the 5th reel, (that is an all-screen wild), which is the maximum. Such odds will result in 5 X 250 of the player’s stake. However, this kind of odd is rare but rewarding.

With all that has been seen so far from the demo version, it shows clearly that there isn’t too much of a difference between Netent Starburst slot and the Berryburst. The Berryburst seems less of what one will expect from a newer version of Netent. Nevertheless, the unfolding of the whole package will tell the story better.