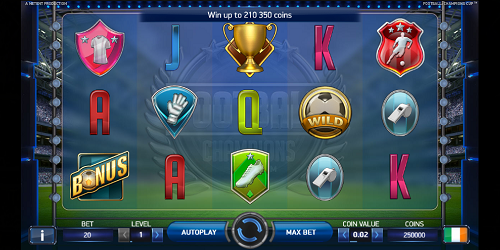 Prepare yourself for the upcoming EURO 2016 playing one of the greatest football-themed slot games for real BTC on the best crypto-powered casino portals.

It finally happened! Recently enough, NetEnt have released the eagerly-awaited “Football: Champions Cup”, their latest sports-themed slot machine, and, as you may have guessed already, it’s fully dedicated to soccer and the hugely anticipated Euro 2016 championship that is going to take place in France in June and July.

The very first positive impression you get with this game is directly related to its greatly attractive graphics that make the slot look like a live match. Expectedly enough, the symbols you’ll see on the reels have connection to football only: balls, shirts, goalkeepers’ gloves, boots, whistles, and, of course, cups (in this game, they represent scatters) stand for higher point values, and regular playing card symbols (A, K, Q etc.) acts as lower ones. There also two special symbols – the one unlocking the bonus, and the Wild which is responsible for launching the free-spins mode.

“Football: Champions Cup” features 20 ways-to-win on its 5×3 reel grid, and, throughout the gameplay, you can benefit from three various bonus features. The first of them – the overlay wilds – is very likely to occur in the base game mode already. These wilds can appear in random position anywhere on the reels, and contribute significantly to your starting point score.

The next bonus feature, a more promising one, is called the Penalty Shootout, and it has the form of a 5-round pick-and-click game where each round consists of two parts. The sequence is triggered instantly as soon as you happen to land no fewer than 3 (five is better, of course) bonus icons anywhere on the reel grid. In the Penalty Shootout, your main goal (in all senses) is scoring as many penalties as you can, as each of them is to become a real Bitcoin reward for you, supplied by up to 16x score multipliers!

And yes, expected to be get an even more massive reward after you launch the Free-spins mode in this game. Here, your main objective is to win the tournament by overturning the 15 opposing teams. In order to launch this sequence, be sure to make three or more Scatter Cup symbols appear anywhere on the reels 2, 3, and 4. The mode comprises four rounds, and each of them is a separate match that you have to win to enter the next stage (which will mean the re-trigger of free-spins for you). There are 6 spins in each round, and, accordingly to the value and color of the paying symbols you will land on the reels in this sequence, your will either be a winner, or a defeated one. Victory can be tough, but then the winner takes it all.