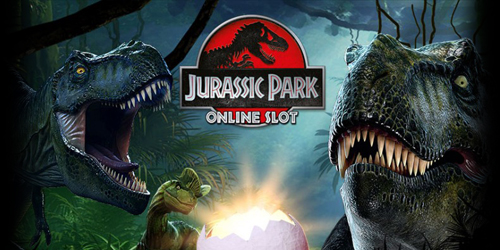 The iconic dinosaurs are back in this dramatic game boasting 243 ways to win on five reels! By the way, ‘Jurassic Park’ has been the first game by the renowned casino gaming soft developer to feature the so-called Parallax Scrolling which really makes you feel all the creatures in this slot are more realistic than anywhere else!

‘Jurassic Park’ includes several highly lucrative in-game bonus features, with one of the most promising of them being the randomly triggered T-Rex Alert Mode lasting for the duration of six rounds in a row, with the dreadful T-Rex wild symbol landing on the reels in the 3rd spin. All in all, you should expect no fewer than 35 wilds to appear on the reels within these six spin rounds, and the probable winnings are more than impressive, meaning you need to keep your eyes open wide for the coveted Jurassic Park logo symbol to drop upon the reels!

Eventually, whenever you land at least 3 scatter symbols on the reels with a dinosaur egg depicted on them, you will instantly activate one of the six available free-spins features, with each of them looking different and having its own distinctive soundtrack, with an up to x6 multiplier serving as a special reward coming along. Additionally, you’ll be able to launch various sub-features including wild reels, split wilds, running wilds, secret and winning wilds, as well as wild multipliers, meaning you can expect to win really massively in ‘Jurassic park’!