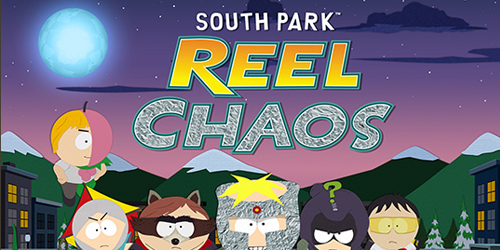 If you liked NetEnt’s original “South Park” slot, we have really great news! The team is back in this new epic creation of the renowned developer team!

Unexpectedly enough, this time the boys are portrayed superheroes protecting the town from Professor Chaos and his villainous team assistants. The slot has 20 paylines on its 5 reels, and it can boast a gripping plot and a great soundtrack, not to speak about its superb real South Park cartoon-like graphics!

The game consists of several fantastic feature sequences named after the main characters. In Cartman’s Stacked Wilds feature Eric if after General Disarray, as he produces stacked wilds climbing up or falling down the reels. Every 2 or 3 stacked wilds he creates can become impressive wins for you. After that comes Kenny’s Multiplier feature where Kenny is shown as a superhero wearing a mask who faces Professor Chaos. In this mode, a multiplier ranging from x3 to x5 will be applied to each of your line wins. Then, you can access Stan’s Multiplying Re-Spin sequence where the protagonist needs to use the power of his mind to mend the broken reels using some electric tools, and launch re-spins on all the slot’s reels until you reach winning combination! In this case, you will be enjoying an up to x10 multiplier (increasing after a losing spin) for your winnings. Finally, At last, in Kyle’s Overlay Wilds feature Kyle himself will be destroying the villains with the help of his powerful laser gun getting you up to 5 overlay wilds!

Whenever you land bonus symbols on reels 1, 3, and 5, the rewarding Mintberry Crunch Epic Bonus Spins feature will be launched, with its protagonists fighting all of the game’s four villains, and this sequence will last until any of the sides is eventually defeated. If Mintberry Crunch beats all of these villains, you are rewarded with betline multiplier increase by 1 per each of them, with some juicy victory bonus in bitcoins awaiting you!