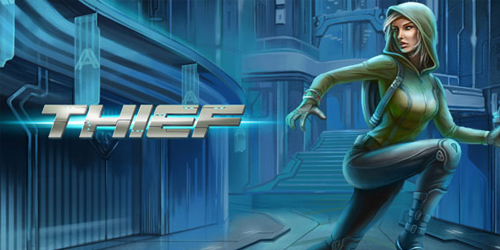 Having 25 paylines on 5 reels, this magnificent game with a very dramatic electronic soundtrack is the real delight for the modern sci-fi action games and movies! It features a set of reel symbols that includes watches, headgear, vault locks, and pistols (as the higher paying icons), plus a range of cards symbols from A to 9 (standing for lower-paying ones).

The Expanding Wild with the Thief’s herself on it is has connection with the game’s most peculiar feature. As you spot it on reels 2, 3, and 4 during the base game, it will instantly expand over these getting you a series of additional free spins bonus rounds that are more than likely to boost your overall winnings. As you may have guessed already, as soon as the Expanding Wilds feature is launched, the wild symbol spreads across the entire reel, letting you have not one but three wilds instead, making your points count grow bigger again!

Actually, there are two types of free spins in “Thief”, and while the first one may be called ‘regular’ being activated with at least three scatters and adding 10 free spins extra to your reserve, there is also the possibility to unlock the so-called Adrenaline spins getting you another 10 extra spins! Apart from it, you final Bitcoin prize may be increased even more with the help of the very special Diamond Symbol activated during the Adrenaline spins sequence.

If you’re looking for something more, try the ‘skill stop’ button which lets you stop the reel spin whenever you think there is a combo with great potential likely to land on the reels anytime soon!

Where you can to play slots from NetEnt