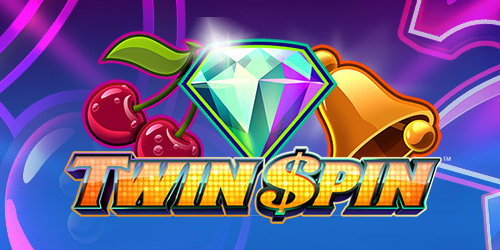 So seemingly basic yet that ingenious and appealing with its colorful symbols, sharp glossy patterns, and the rhythmical old-school music that heartwarming!

The truly marvelous “Twin Spin” slot by NetEnt casino gaming development masters has as many as 243 paylines on its 5 reels, and, although it may be resembling of some more simple slot machines of the past, it’s more than just worth being tried at least once! Like many other games by both NetEnt and other designers, it has a series of standard paying reel symbols like 9, 10, J, Q, K, and A, whereas there is also of course a set of premium ones including a cherry, a ‘7’, a diamond, a bell, and a bar, which, again, brings us back in the golden days of the real-life slot machines.

Certainly, you should also expect the wild symbol to appear on the reels in this game every once in a while, as it will be replacing other icons to help you make up winning combos and boost your bonus point standings!

Whenever you get all of the game’s paylines activated, there will be lots of possibilities for you to become victorious by matching symbols on reels from the left to the right. The game is named after its principal bonus feature called Twin Spin which is really unique in a certain sense, as with its help you can have identical (winning) symbols on certain reel pairs during every round of your gameplay: whether on the first two reels, the last two reels, or any reel pairs between them. A small hint: the win is more likely to occur if identical symbols appear on the reels 1 or 2, with high probability for these to expand into three to five reels, meaning you can expect a really immense final win!